The Earth’s energy grid can be thought of as a web that holds or links the Earth together. The energy grid is affected by many influences – electricity, magnetism, light, color, heat, sound and matter. Today the electrical AC system which provides our basic need for energy to our households has a substantial impact on the well being of the earth and greatly influences its grid. The study of these detrimental lines is called Geo-pathic stress or Geo-biology.

As the Earth So are We

The planetary energy grid operates through geometrical patterns that follow a specific symmetry. The grids meet at various intersecting points forming a matrix much like the matrix of our bodies as defined by the meridian system. Before the advant of the industrial age and the electrical grid system, the Earth had a balanced set of detrimental and beneficial lines.

It would seem that we can understand how the sun’s energy impacts the earth “detrimentally” (via solar storms) and “beneficially” (via the portion of the Electro-Magnetic spectrum that supports photosynthesis). We also seem to understand the impact of the moon has as well such as the moving of the tides of the oceans (and by direct correlation the movement of the fluids within every living thing on the earth as well).  Geobiology and/or Geopathic stress is a study of the influence of earth energies (meridians of electromagnetic energy) on all forms of life. As a student of Bio-Geometry, the goal is to assist people in their understanding of how all living beings are affected by the beneficial and detrimental earth energies and to provide information on necessary steps to operate with them or transmute them in order to maintain the well being from themselves, their families and the planet. Coincident to this discussion is a conversation about the impact of EMI from the house AC wiring.  While the two topics are different they are highly related and the detrimental aspects of the Geo-pathic stress lines increases with the affect of EMF Radiation.

Gustav Freiherr von Pohl (born in 1873), a German baron that in December 1928 began doing dowsing reach in a small South German town, Vilsbiburg, looking for the causation between location and cancer as this small town had developed an extremely high rate of occurrence. He documented his findings of the correlation to the determinental lines and the people that developed cancer and recording them in his book which you can find here  Also see the video below for more detail. 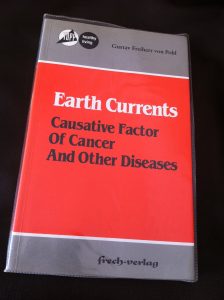 Dr. Ernst Hartmann was born in 1915 in Mannheim, Germany. He studied medicine in Mannheim and Jena and was active in the Second World War as a medical officer. After his release from captivity he opened his own practice in Eberbach, where it worked for over 40 years. Driven by his desire to understand how to detect earth energies interfering with his patient’s well being, he re-discovered using rods for dowsing enabling him to do the geo-biology research to which he was driven and to which he concerned himself intensively beginning in 1948. He considered that the well-being of mankind in body, soul and spirit were directly interrelated to the environment in which each individual spent much of their life time.

Often Dr. Hartmann observed his patients making many return visits with what he assessed as relatively harmless and otherwise medically curable or controllable illness however, founding no responsible remedy that would hold. Thus he came to suspect that the earth energy currents were involved and began researching in the individual patient’s homes and sleeping areas to see if his thoughts were accurate. He confirmed his assumptions after he had re-arranged the patient’s bed and the diseases quickly disappeared.

Hartmann was one of several other researchers to discover a grid of disharmony. Curry and Benker were also German researchers that continued Hartmann’s work and located additional geo-pathic grid workings to which their names have been applied.

Curry lines run diagonally to Hartmann lines and Benker lines appear to be a harmonic of the Hartmann and are supper imposed upon them.  Today this subject has been explored by many in the alternative health arena most of whom have had similar experiences as Hartmann with individuals in their care who had disease processes that could not be remedied leading them to discover the geopathic stress that was involved with the individual.

Please watch this short history of the early research and findings to learn more.

Rolf Gordon who lost a son to cancer indicated that “Geopathic Stress is the common factor in most cases of physical and mental illnesses”  and that
Rolf came this conclusiong having perform investigations for many years “how sleeping in a Geopathic Stress place is the only common factor in cases of cancer and other serious and long-term illnesses, both physically and mentally and when babies are born with a defect.” ROlf documented his work in his book “Are You Sleeping in a Safe Place?  Click here to read further.

An American research and inventor Slim Spurling from Coloroda has made a very large impact on the work here in the Unite States, conducting many training sessions and performing research the the effects. He notice in particular intersections with heavy traffic accidents to typically had difficult geo-pathic stress lines involved and when he would place his “staples” of copper welding rods across those lines the the incident of accidents reduced for that intersection.  Slim and his research partner Bill Read invented many devices to help produce beneficial fields to help mitigate and transform these detrimental energies call light life tools (soon to be add to the store on this site) and Slims work has been documented in this book that you can find here.

Research Notes from Basics to Wellness

I have had the opportunity to test literally 100s of house holds over the course of the past 6 years, many times for individuals with advanced disease states. Nearly at a 100% occurrence rate the individual with such a state was spending considerable time (at least sleeping in) a geopathic / EMI field space.

Each time a test was made, we were always surprised to see once again the connection to the lines and the individual and many times having the “hot spot” of the lines right at the location of the disease organ. Many times testing was done in the blind so that we did not know where the person would sleep and how they positioned themselves on the bed. Then after having located the detrimental field, we would have the individual lay in the bed and correlate the field/spot location to them and many times having that correlation be at the exact place of the organ in question . On one such occassion, we encountered a Benker line that passed through one end of a fish tank and it was observed that the fish would not swim in that part (about 1/3 the size of the tank). The fish would swim right up to the Benker line (where it began and turn away). We experimented with this and had the owner feed the fish in the area of the benker line to see if we could entice the fish to swim in that area of the tank. No deal, they would come a get their food and swim back to the other side of the tank.

The Geo-resonators have shown time again to mitigate all three lines, as well as Geo-magnatic and underground water streams.We first test the house and the property to become aware of the lines and there impact on the dwellers and them plant the Geo-resonators (click the image for more information)

at the four corners of the property as follows: 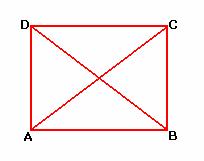