“If you ask me whether autonomous vehicles will become commonplace, my unequivocal answer is yes, there’s no question about it. The technology is almost there, the world is almost there, there’s an economic motive for getting there, and drivers will slowly start to get used to the idea that you can get rid of the boring task of driving.” – Amnon Shashua, CTO and Co-Founder of Mobileye (Mobileye is the leading supplier of software that enables Advanced Driver Assist Systems (ADAS))

The future is now  in the automotive world .. but then again not so much. This bright future that is being touted throughout the industry claimed as great advancement comes with a heavy price tab. You and your families health, and no one in the industry is talking about it.

Blind spot detection, Lane change assist, Automated Parking Aid, Autonomous driving, Adaptive Cruise Control, Emergency Braking Assist, crash avoidance all are great ideas to improve upon the number one arena for injuries and fatalities, driving on the road. There is no waiting for these technologies to be available, they are already here and in mass. As you can seen from the picture  below, the RADAR systems will cover a large area outside of the car. These RADAR waves will blanket a vast area. 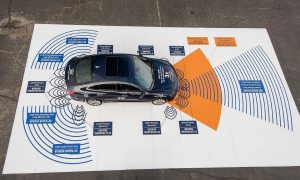 When they RADAR systems are active they will be spraying RADAR approximately 200 feet in  front of the vehicle and more than 50 feet to each side.

For the older vehicles (like the one I drive and planning on keeping) the interior of the cabin would be effected in the front up to the knees of the driver and front seat passenger. The electronic systems in these older vehicles definitely produces EMI, however, only basically the dash area is covered. I have tested these areas both via vibrational dowsing via Bio-geometry and with a tri-field meter that measure Electrical, Magnetic, and Radio frequency fields. For this reason, one’s legs would get quite tired from a long trip. However, with the newer technologies on board, the entire interior is filled with very high powered EMI. So these new vehicles not only very actively submerge its passengers with RADAR EMI but also the vehicles that are in proximity to them.

If this was not difficult enough with the addition to these RADAR systems to the newer vehicles, soon, the infrastructure (the highways and road systems as depicted below) will be actively communicating with the vehicles via WIFI and will increase EMI toxic load to the passengers of the vehicles.

Using vibrational dowsing that allows for the detection of subtle energy fields, I was able to test vehicles with these newer technologies on board to determine the interior and exterior extent of the transmission. Also as a part of the testing was the extent of the penetration into another vehicles cabin.  When a newer vehicle had fully engaged its active safety technologies (in drive and moving forward) the other vehicle that was in the range of the RADAR of the first vehicle was completely filled with the EMI. What this means is that there are no barriers for it to penetrate into the older vehicles and simply just retaining a vehicle that does not have these technologies on-board will not work long term.

There is a solution, the EMF Vehicle adapter

When the the same tests where performed as described above the results showed that the Vehicle Adapter indeed created a bubble around the vehicle and cleared within protecting both from the internal EMI and the external EMI.

Here are a description of the tests perform:

2) with the EMF Vehicle Adapter in the other older vehicle.

Under both circumstances the detrimental fields were mitigated and transformed. The adapter places a bubble around the other vehicle into which the RADAR EMI of the newer vehicle can not penetrate.  When placed in the vehicle with the active RADAR,  the detrimental fields are not just mitigated but transformed into beneficial waves that extent approximately 50ft forward and 10 ft to the sides.